If you are primarily interested in Secret NFTs, I would suggest you read this page instead as it contains everything  about it.

Before getting into this Secret Network review, let me list all the useful guides I have created that can help you interact with Secret Network:

Secret Network has cross-chain capability through Secret Bridget and has the capacity to interact with ETH and ERC-20 based tokens, and BNB and BEP-20 based tokens. One of the most impressive dApps running in the network is SecretSwap, a front-running persistent DEX/AMM. Soon, the first NFT marketplace will launch in Secret Network - Stashh. Stashh will allow users to buy and sell secret NFTs.

Patlid guide on how to buy $SCRT.

Secret Network coin, $SCRT, is available from several exchanges. If you have the possibility to buy $SCRT from a centralized exchange, then that is an easy and fast option.

In case you are in a country where $SCRT is not available to buy. Please refer to this guide on buying another token and then swap for $SCRT using the Osmosis DEX (coming soon).

Before we dig any deeper into Secret Network, let us have a look at blockchain privacy. This will create a better understanding as to why Secret Network is important.

Web 2.0 failed miserably at building privacy. It is unclear whether privacy online will be a right or not in the future. If you let the big corporations decide, it will at best be a conditional privilege. Pay a premium for your new iPhone and skip tracking, buy the cheap version and have your data tracked, analyzed and distributed. Privacy should not be conditional. It is a fundamental personal right of every citizen.

Governments and regulators is in the privacy battle as well, laws such as GDPR is improving things. But the problem with Web 2.0 is that there is no privacy around the core. It will continuously be a struggle between stakeholders and institutions, dragging everyone along.

Privacy blockchains like Secret Network is helping to shape the future of blockchain privacy. Which can help redefine the power dynamics in finance and other sectors. Introducing new technical infrastructure, allowing users and technology to secure network activity and shape projects. In a private and decentralized way, free from legacy, institutions and corporations that governs all aspects of our lives, and activities today.

Blockchains like Bitcoin and Ethereum helped shape what we have to work with today. Bitcoin and its underlying blockchain technology was created to move society to an economic point that can't be controlled, or (mis)managed by central bankers and government. Ethereum gave us the ability to build programmable, open-sourced decentralized applications that are governed by communities of token holders and developed by developers from all over the world.

For all the greatness of Bitcoin, Ethereum, and other blockchains - empowering millions of users and thousands of dApps, they still suffer from one major weakness. The blockchains lack privacy. Almost all blockchains today are public. Both organizations and governments are going to extreme lengths to remove the anonymity in the anonymity mechanism that is default in blockchain technology. The old "blockchain is anonymous" is unfortunately not true. Those that look, are going to find. This exposes the transparency of blockchains like Ethereum to surveillance capitalism and anyone who's watching.

Privacy coins like Decred, Monero, and Zcash are managing privacy through advanced cryptography to obscure transaction details. What makes Secret Network in this group of privacy blockchains is to provide privacy-preserving smart contracts. Through their programmable smart contracts with privacy-by-default, introducing usability perks and making way for new use cases.

Blockchain privacy is essential in DeFI and functional Web 3.0, where the point is to provide privacy at its core, in a decentralized way.

What is Secret Network?

Secret Network is a privacy blockchain active in the application layer of blockchain. Not only does it provide privacy in transactions and act as a store-of-value, the network uses an open-sourced protocol with privacy smart contracts. Allowing developers to build dApps that are perfectly in line with the needs of decentralized finance.

The fundamental belief within Secret Network is that users and organizations require privacy-preserving controls. And that this is achieved by allowing anyone to perform computations on encrypted data. Which ultimately will lead to privacy blockchain technology at a large scale - for the benefit of everyone.

The block time of Secret Network is around six seconds, making it a fast blockchain. It can process thousands of transactions per second. In the network, there are currently 46 active validators, with around 50 delegators per node.

Secret Contracts are similar to Ethereum smart contracts, but work with encrypted data. They are privacy preserving smart contracts based on CosmWasm and coded in Rust.

The privacy of Secret Network contracts are guaranteed through modules running inside Trusted Execution Environments (TEEs).

If you want to read more about Secret Contracts, you can do it here.

Secret Tokens use the SNIP-20 standard native to Secret Network. The basis of this unique privacy standard is CosmWasm's CW20 and Ethereum's ERC-20 (and ERC-777).

Secret Tokens are private-by-default, and token holders can access a viewing key for each secretToken whenever necessary. They can use the viewing key to grant access to dApps.

The first-ever secret token was secretSCRT ($sSCRT). $SCRT is public by default and need to be converted/wrapped into $sSCRT to gain privacy-preserving attributes. 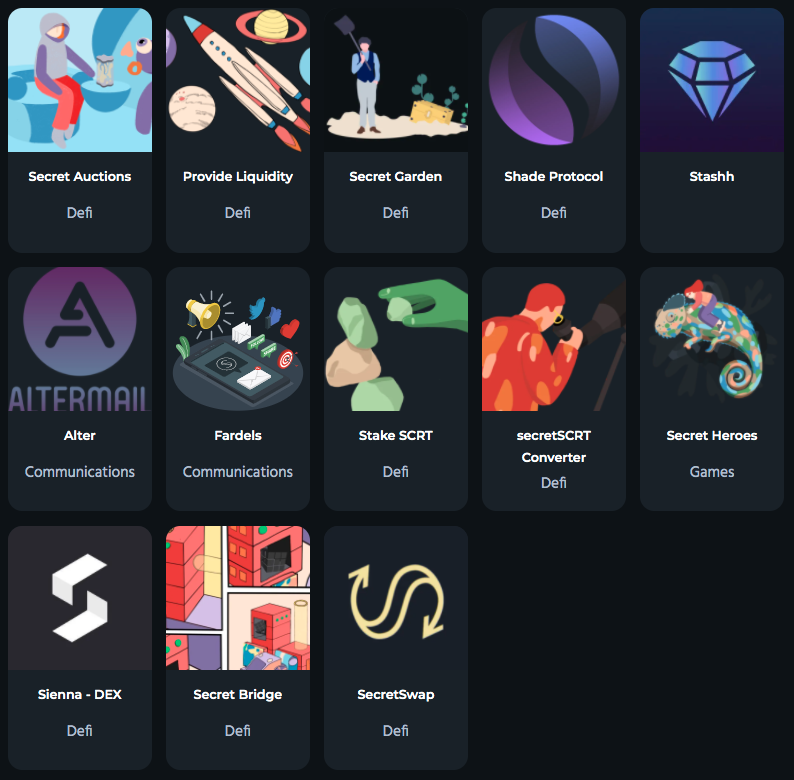 Secret Network has a growing ecosystem full of utility. The best part of it is the active and dedicated community and team behind it. New dApps and integrations are being worked on constantly. Below follow a quick walkthrough on the different decentralized applications in Secret Network.

I'll start with SecretSwap as it is my favourite dApp in the ecosystem.

• Users can swap one secretToken for another, for example, between $sETH and $sSCRT.
• User scan become an LP for pools and add LP tokens.
• Users can stake SecretSwap LP tokens and earn $SEFI rewards. Currently, 55% APY.
•Users can also stake $SEFI, participate in governance and also earn 35% APY.

What makes SecretSwap stand out from other DEX dApps is that it is front-running resistant. The inherent privacy attributes of the contracts means that front-running bots cannot get any advantages over "regular" users.

This is big, front-running is a major problem in blockchain. It can be compared to inside traders in legacy financial instruments, where a trader use non-public information that is not available to everyone. In blockchain transactions, there is always a slight delay that some are able to exploit to get an unfair advantage, similar to that of inside trading.

Secret Network in a silo cannot stay competitive. The success of a Layer 1 blockchain today is the utility it offers outside its own ecosystem. What the blockchain can offer other networks, and introduce new users to the ecosystem.

Secret Network excel at interoperability. One fundamental strategy has always been to connect to other networks, tap into their ecosystem of users and dApps. They achieve it through Secret Bridge.

The first bridge was the Secret Ethereum Bridge, which bridged Ethereum and ERC-20 based tokens. This happened around one year ago, 15th December 2020.

The way it works is that users lock tokens e.g. $ETH in Ethereum and mint the equivalent amount of secretETH tokens at a pegged 1:1 value. Giving the $ETH privacy while allowing the user to interact in the Secret Network ecosystem. 🤯

Patlid Guide on How to Mint Secret NFTs.

Besides SecretSwap, Secret NFTs is what I am most excited about in the Secret Network ecosystem at the moment.

I have a dedicated page for Secret NFTs where you can read everything about it.

So, yeah, the privacy properties of Secret Network's smart contracts are not limited to regular crypto tokens. They include NFTs. And NFTs within Secret Network is, of course, called Secret NFTs.

The standard used for NFTs is the SNIP-721. The Non-Fungible counterpart of Secret tokens has the same privacy attributes.

I won't go into too many details here. For the full scope, and to share all my enthusiasm about Secret NFTs - visit the dedicated page.

What makes Secret NFTs unique is these three main aspects:

These aspects allow owners to stay anonymous, these NFTs have unique use cases not seen before (for example, Redacted Rabbits secret DNA). The last one unlocks unique use cases for exclusive content or certain NSFW content.

At the time of writing this, only four Secret NFTs have launched in the Secret Network. New, and full of promise.

In the already busy ecosystem, a lot is happening. Here is a recent iteration of the Secret Network roadmap (Dates from December 2021). 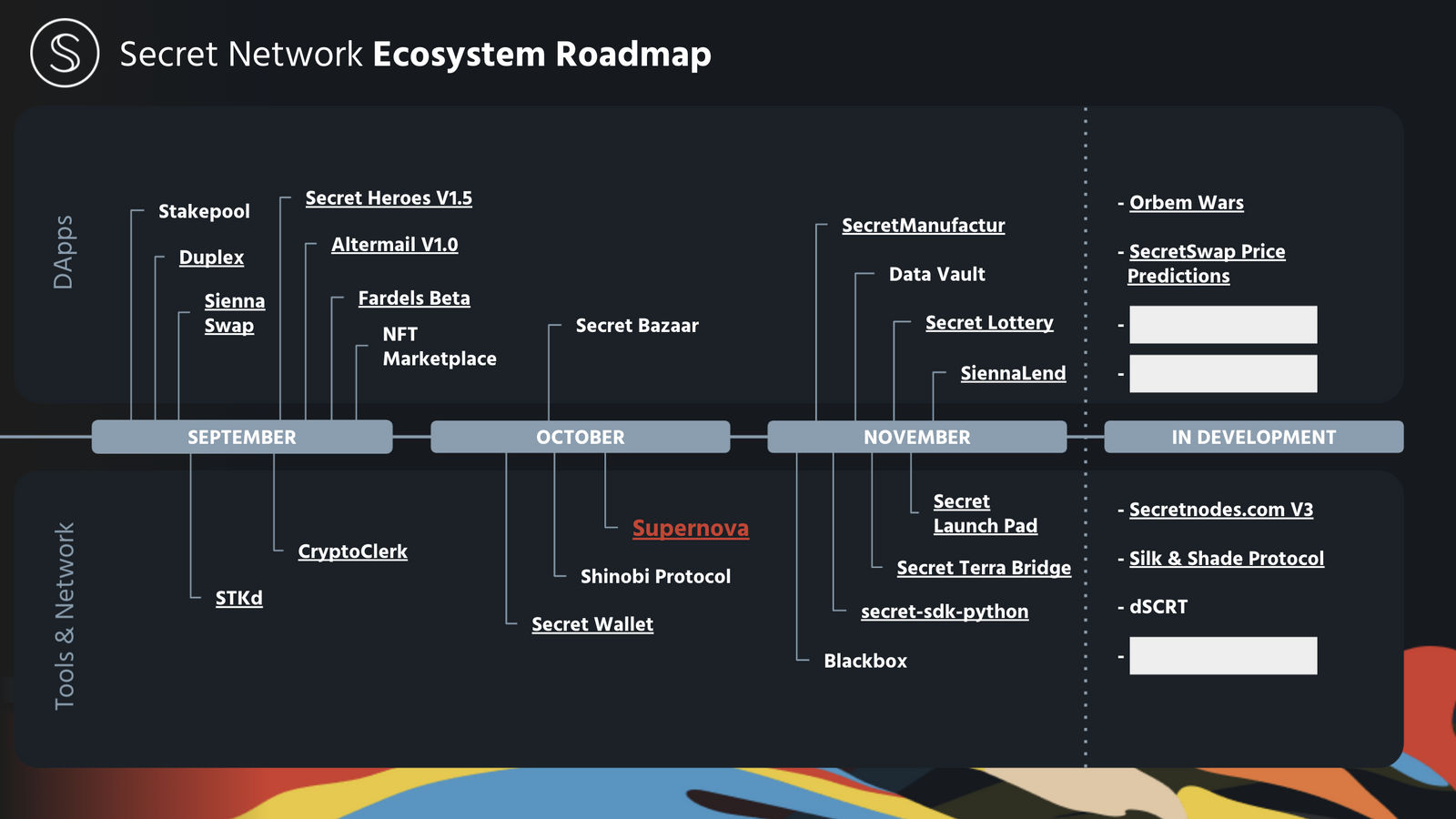 I wanted to share my recommended Secret Network wallets you can use before you get on your way to buy Secret Network coin, explore the ecosystem, or mint Secret NFTs:
‍
• Keplr Wallet - Most useful wallet.
• Cosmostation Wallet - My favourite mobile wallet (10/10 UI).
• Citadel.one - Wallet and DeFI platform.
• Ledger - Hardware wallet.
‍

Once you get acquainted and used to interacting in the ecosystem, you may want to explore these Secret Network tools: